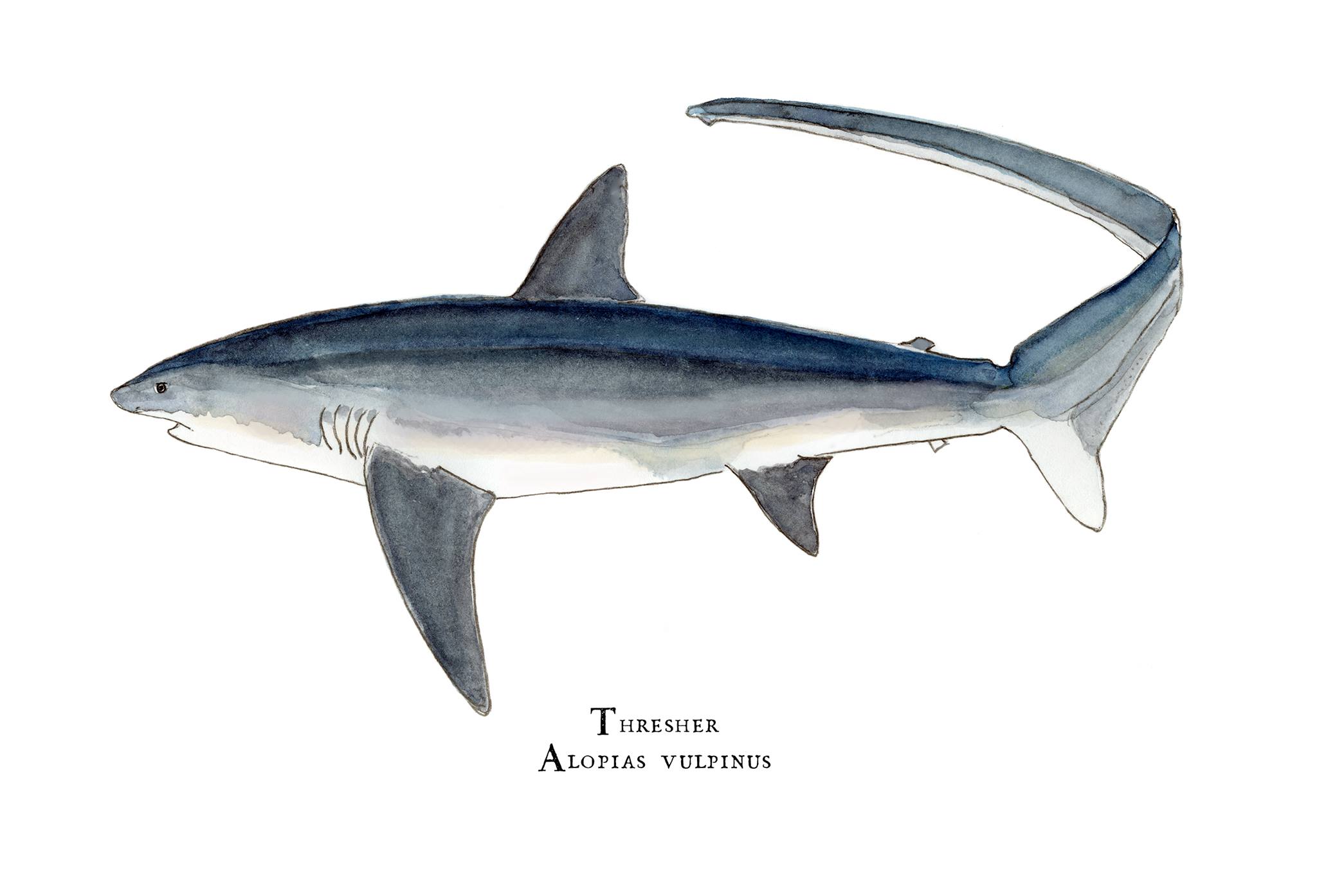 You probably know it as the thresher shark, but I bet you didn't know it's scientific name originates from an unlikely terrestrial animal--the fox. Alopias vulpinus comes from the Greek "alopex" and the Latin "vulpes," which both translate to "fox." One of three (possibly four) shark species from the genus Alopias, all three have the characteristic long caudal or tail fin, which, if one uses his or her imagination, may conjure up the long, full tail of a fox.

The common name "thresher," alludes to the use of the word to describe a person or machine that separates grain from the plants by beating it. The thresher shark uses its namesake caudal fin to beat its prey species, which most commonly consists of schooling fishes. Thresher sharks are considered harmless to humans.

The thresher shark (sometimes also called the common thresher shark, the fox shark and the swiveltail shark) is larger than both the bigeye thresher (Alopias superciliosus) and the pelagic thresher (Alopias pelagicus). Reaching a maximum size of 400 cm and nearly 350 kg, the thresher shark is a migratory species that, while not common in the Gulf of Maine, is a well-documented seasonal visitor. The species is circumglobal in tropical to cold-temperate sea. While it prefers open ocean, it is also found in coastal waters, especially when young.

Highly valued for its meat and large fins, the thresher shark has been over-exploited throughout much of its range. While many illegal, unreported and unregulated fisheries target the species, thresher sharks also commonly fall prey to gillnet and longline fisheries as bycatch or secondary target catch. It's estimated than between 1986 and 2000, thresher shark populations declined between 63 and 80 percent in the west/northwest Atlantic. All species in the genus Alopias are currently listed as "Vulnerable" on the International Union for Conservation of Nature's (IUCN) Red List. At present, only the California population has any fisheries management plan in place.

Like many sharks, the thresher shark is particularly susceptible to over-exploitation. In large part, this has to do with the species' reproductive strategy. Thresher sharks are live-bearers (ovoviviparous), and, as a result, have small litters of typically just two to four pups. It takes at least seven years (and sometimes as many as 20 years) for thresher sharks to reach sexual maturity.

An ongoing study of worldwide population genetics began in 2004, and scientists are learning more about the species' distinct population segments (DPS). According to the most recent research, there appears to be little to no immigration and emigration between geographic areas. In March of 2015, the National Marine Fisheries Service (NMFS) announced that a petition to list the thresher shark under the Endangered Species Act (ESA) presented substantial scientific or commercial information indicating that the petitioned action may be warranted for the species worldwide. NMFS found, however, that the petition failed to present information to support the identification of DPSs of the thresher shark. NMFS's evaluation of the thresher shark for ESA listing is ongoing at this time.

Fishes of the Gulf of Maine (1953) Thresher Shark Chapter 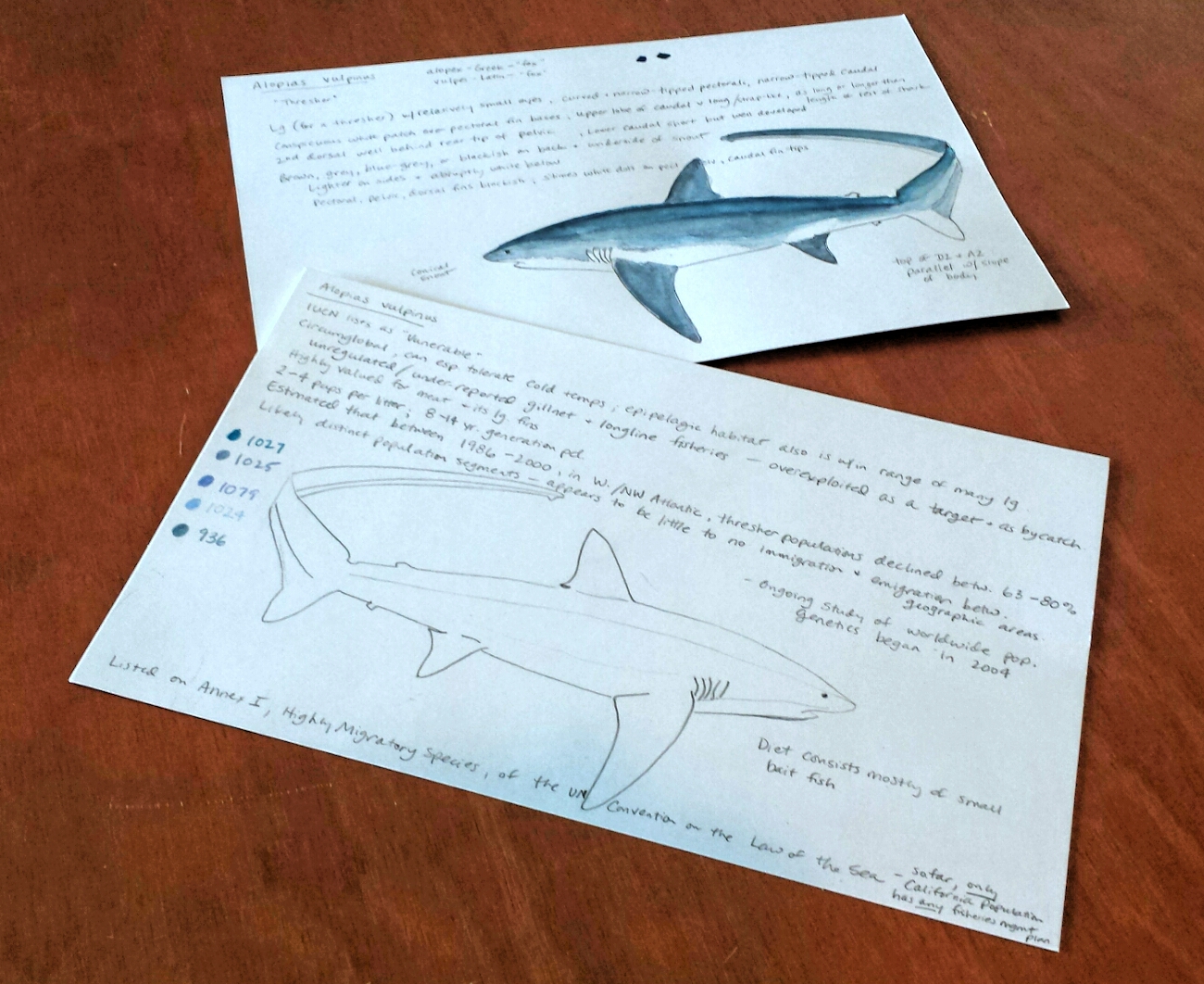