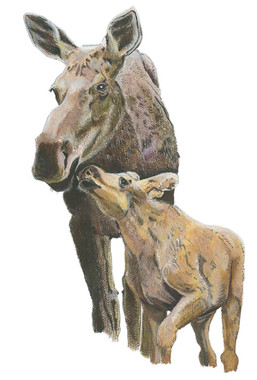 Hover over image to zoom

This ready-to-frame watercolor and colored pencil limited edition giclee print is double matted in an ivory buffered and pH neutral mat with gold reveal. It is hand-signed/numbered and titled by Karen and arrives packaged in an acid-free clear bag with an acid-free and pH neutral backboard comprised of 100% recycled content. This one-of-a-kind print is ready for framing in a standard sized 16"x20" frame, or you can purchase it framed.

The moose (Alces alces) is the official animal of the great state of Maine, and it was the first mammal added to my print catalog. Moose are the largest member of the deer family and can be found in northern forests worldwide from North America to Russia (they were also introduced to New Zealand but have since been extirpated). There is some taxonomic debate surrounding whether or not the "moose" more often found in Eurasia (commonly called "Eurasian elk") and the moose found more often in North America are actually the same species. Some consider the latter to be Alces americanus, a distinct species from Alces alces, while others propose separation at the subspecies level with Alces alces americanus being the animal found here in Maine and Alces alces alcesbeing the animal more commonly found throughout Eurasia. To confuse matters, hybridization occurs between the two.

As you know, the tagline for Karen Talbot Art is "conservation through appreciation," and I want to take a moment to share some conservation concerns regarding moose. While moose are generally considered a species of least concern in terms of its conservation status, human-caused habitat alteration in their southern range is a threat. To add insult to injury, this habitat alteration has also caused other issues for moose. For example, as boreal forests have been reduced in some places, increased habitat appropriate for white tail deer (e.g., open fields, deciduous forests) has caused increased deer populations. White tail deer carry meningeal or brain worm (Parelaphostrongylus tenuis), which is a known major mortality factor for moose.

An October 2013 article in the Washington Post opened with a sentence that made many moose lovers standup and take note. "Moose in the northern United States," the article opened, "are dying in what scientists say may be the start of climate shock to the world's boreal forests." Anyone familiar with conservation knows it's often unwise to paint any wildlife conservation issue with too broad a brush. Here in Maine, for example, our northern moose populations seem to be doing well, while there appear to be fewer moose in the southern part of the state. In Michigan, though (where white tail deer populations are very high in some places), moose are in real trouble. While climate change has been implicated as a threat to moose populations, the numbers of moose sited further south in New England (e.g., Massachusetts and Connecticut) have continued to increase.

The bottom line is that the conservation status of moose is something I believe we need to watch, and I'm therefore thrilled to now have a moose in my print collection. Displaying this moose print in the Karen Talbot Art Gallery and at shows will hopefully provide an opportunity to share information about the species with people who may be unaware of its conservation status.

This product hasn't received any reviews yet. Be the first to review this product!