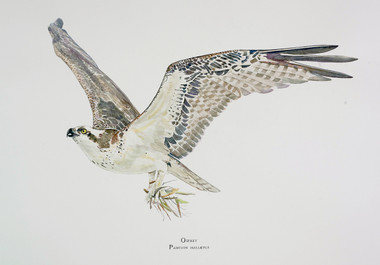 Hover over image to zoom

Georges River Osprey (Pandion haliaetus) Limited Edition Giclee Print, Hand-Signed & Numbered
This ready-to-frame watercolor giclee print is printed on artist watercolor paper with archival pigment inks. It is one of only 30 printed in the run, and each is is hand-signed and -numbered by Karen and arrives framed or packaged in an acid-free clear bag with an acid-free and pH neutral backboard comprised of 100% recycled content. Unframed giclee prints are ready for framing in a standard sized 18"x24" frame, or you can purchase it framed. This print is also available framed or unframed as an open edition print in a 11"x14" mat. For a brief description of the advantages to a Karen Talbot Art giclee print over an open edition print, have a look at this video. An album of images of this piece in process may be viewed on the Karen Talbot Art Facebook page.

Select giclee prints are available with embellishing and remarquing options. Both of these options offer a greater degree of artist involvement and result in very unique, one-of-a-kind pieces. In the case of embellishing, Karen hand-embellishes the giclee print with watercolor paints, and in the case of remarquing, she adds a hand-drawn pencil sketch to the bottom of the painting (watch a short video of Karen adding a remarque to a limited edition giclee here. Both of these options greatly increase the value and uniqueness of the print, and they are the best choice for print collectors wishing to acquire highly-specialized prints with an even greater degree of collectability. If you would like your limited edition giclee to be remarqued, you will need to choose which remarque you would like Karen to include. For most gamefishes, your option will either be an appropriate fly or a detail of the species.

The cheep cheep or teeyerp call of ospreys (Pandion haliaetus) is a fairly common sound in the Georges River watershed, as it is throughout Maine in the spring and summer. The word "osprey" has its origins at least as far back as the 15th century owing to the Medieval Latin "avis prede" or "bird of prey." The earlier Latin word "ossifragus" or "bone-breaker" is another possible antecedent of the species¿ common name. Also commonly called the fish hawk, fish eagle or sea hawk, the osprey is a highly adaptable raptor that primarily hunts and eats fish. In fact, it is so adaptable that it can be found on every continent except Antarctica (although they only migrate to, and do not breed, in South America). P. haliaetus' wingspan can reach 180 cm across, and, like owls, osprey can reverse their outer toe, making catching and carrying fish easier. Males and females are similar in appearance, with adult males being somewhat slimmer and possessing a less distinct or non-existent breast band. New England breeding pairs winter in the southeastern United States or South America, and the ones we see here in Maine begin returning from winter grounds in April. An osprey can live for at least 25 years, but the average lifespan is 15-20 years. During that time, an osprey may migrate upwards of 160,000 miles.

While populations declined drastically in the mid-twentieth century secondary to DDT and other insecticides, populations have rebounded in much of the species' range. Generally considered a conservation success story, local populations still struggling to rebound in some inland states. As I was working on this painting, the cheep cheep of a pair circling over my studio was a constant inspiration.

This painting is part of Georges River Sketchbook, a show exhibited at the Karen Talbot Art Gallery, Rockland, Maine, in 2013. A percentage of the sale price will be donated to the Georges River Land Trust. A limited edition run of 30 museum quality giclée prints was released in August 2013.